Fears of increasing protectionism in the face of the global crisis 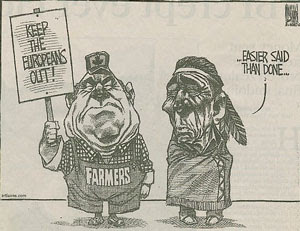 Europe is watching closely to see whether a "Buy American" provision relating to steel will make it into the final version of the US stimulus plan bill to be signed by Barack Obama, fearing it will affect European exports.

At the end of Bush presidency, French government officials turned mad following the announcement by U.S. trade authorities that Washington was tripling the tariff on Roquefort cheese imports from France, among scores of European products targeted by a 100% levy the U.S. imposed in 1999 in retaliation for the European Union's longstanding ban on hormone-treated American beef on the grounds that it may be unsafe to eat.

The Roquefort focus may also backfire because French Roquefort producers say they'll seek financial compensation from France and the E.U., rather than harangue Brussels to lift its beef ban. "The United States is hoping producers will put pressure on Europe," said France's famous anti-globalization crusader and Roquefort producer, José Bové. "But it's clear: at no time will producers put pressure on Europe to open its borders to hormone-treated beef."

Free trade? Hum. Something to re-consider within 2 years...

Speaking at the World Economic Forum in Davos, WTO chief Pascal Lamy said he was concerned that countries would increasingly turn to protectionist measures during the economic downturn. "It is natural in such a crisis that there is a big call for protection. But that does not mean there should be protectionism," and he urged world leaders to use April's G20 meeting in London to help conclude the Doha round of trade talks.

Japanese Finance Minister Shoichi Nakagawa warned Tuesday against a return to the protectionism of the 1930s seen as a catalyst for the Great Depression. "We've learnt from the Great Depression that it would lead to disaster if a law similar to the Smoot-Hawley Tariff Act comes up," Nakagawa said, referring to a law passed in 1930 that imposed sweeping rises in US import duties. "Previous G7 and G20 meetings have confirmed that we shouldn't get mired in protectionism," Nakagawa told reporters. All members of the World Trade Organisation (WTO) must abide by its rules, he added.

The United States were recently criticised by trade partners for a "Buy American" clause in a massive stimulus package, which has since been watered down. Supporters of free trade fear that the global economic crisis and the subsequent wave of job cuts could prompt governments to pursue policies that favour national companies and reduce global trade flows.

"There’s no question that the “Buy American” stipulations attached to some of the stimulus mandates involving steel and iron sourcing represent another beggar-thy-neighbor edict that is illegal and immoral under NAFTA and other trade agreements."

Obama is believed to be a free trader, as are many of his advisors, but the world will shortly see how post-political he will be in dealing with the most destructive and commonplace populism around: protectionism.

Quotes from courtesy of newsletters
Posted by Unknown at 8:02 PM
Email ThisBlogThis!Share to TwitterShare to FacebookShare to Pinterest