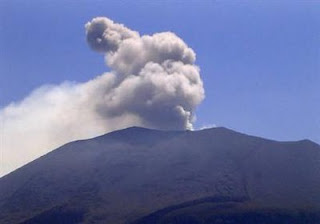 When he said that there were prospects for an eruption that could throw volcanic rocks to a distance of around 4 kilometers, Sadayuki Kitagawa, the senior coordinator for volcanic affairs at Japan's Meteorological Agency, knew exactly that the situation was serious. Ten days later, even if the activity of the volcano is worrying, signs appear of a better preparation and a more secure warning system for the local Karuizawa area.

Last August, Japan Meteorological Agency raised the level to 2 from 1 for Mount Asama, which sits on the line dividing the prefectures of Nagano and Gunma near Kita-Karuizawa where I had stayed. Reason is that the agency took this "crisis-management decision" because of an increase in volcanic tremors and smoke discharge. Before Mount Asama last erupted in August, it also was preceded by large outbursts between September and December 2004 as we can see on this picture from a resident: 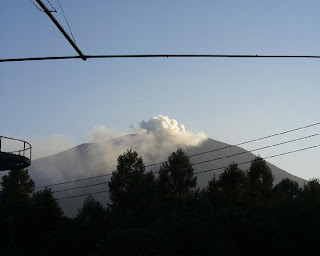 The agency heightened the warning level after observing signs of an eruption, including ground movements and an increase in the number of earthquakes with a high frequency of seismic waves. Warning and monitoring paid: the authorities managed to issue a warning to local municipalities about 13 hours before the eruption early February 2nd for Mount Asama, achieving its first successful alert since it started up the system in December 2007.

The agency alerted the municipalities of Miyota, Karuizawa and Komoro, all in Nagano Prefecture, and Tsumagoi, Gunma Prefecture, at 1 p.m. Sunday that the volcano warning level had been upgraded to 3 from 2. All four municipalities responded promptly. The warning was described as "the first success of this system".

A level three alert covers non-residential areas near the crater of the volcano and warns people not to approach the volcano. It was the first such alert for Mount Asama since the Meteorological Agency adopted the current volcanic warning levels. 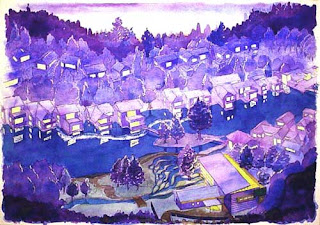 Quite a relief and a satisfaction for the traveller willing to “take the waters” around the famous Asama-san, renown for the curative abilities of its mineral-laden water as reveled in the delights of “onsen”, the hot-spring baths that are the basis of this quintessentially Japanese form of relaxation such as Hoshinoya Onsen:

"Hoshinoya in Karuizawa has been one of the most memorable experiences. The landscaping and grounds provide sensual joy. Lush terraces and man-made waterfalls delight the senses. The Ryokan ("Auberge or Inn") is set amongst Karuizawa’s thick forest of Japanese maple. Architect/designer Rie Azuma highlights leafy canopies and sculptured trunks with subtle illumination; in the autumn, the forest is robed in gold and crimson glory. Stone paths to the baths and dinning room are romantically lit. The room design is based on textured plaster walls the color of green tea and the bedrooms have cathedral ceilings, a sign of ultimate luxury in a country where doorways and ceilings normally challenge tall Westerners."

Posted by Unknown at 10:49 AM
Email ThisBlogThis!Share to TwitterShare to FacebookShare to Pinterest