France's first military base in the Gulf! Rafales Fighters in the pact 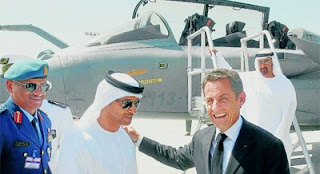 French President Nicolas Sarkozy and Emirati Deputy Prime Minister and Interior Minister Sheikh Saif bin Zayed al-Nahayan inaugurate France's first military base in the Gulf on May 26, 2009 in the United Arab Emirates' capital Abu Dhabi. Sarkozy, on the second day of a visit to the oil-rich Gulf state, declared that Paris plans to submit proposals to world leaders at the G8 summit in July to try to end oil price volatility. France's so-called "Peace Camp" in Abu Dhabi will host up to 500 troops stationed in three sites on the banks of the strategic Strait of Hormuz just across from Iran: a navy and logistical base, a desert air base with three fighter planes and a training camp. France has a handful of military bases mainly in Africa including its largest in Djibouti, which occupies a strategic position on the Gulf of Aden.

France is a leading military supplier to the UAE, and the two countries are linked by a 1995 defense pact under which their armed forces chiefs meet once a year and their forces conduct around 25 joint military maneuvers per year. UAE Foreign Minister Sheikh Abdullah bin Zayed al-Nahayan reported progress in talks on the possible purchase of French Rafale warplanes, a deal that could be worth as much as six to eight billion euros (eight to 11 billion dollars). "It was discussed... I can say there has been positive progress on this issue," France hopes the UAE can be persuaded to replace its fleet of French Mirage 2000 combat planes with 60 new multi-role Rafale jets.

Posted by Unknown at 4:50 PM
Email ThisBlogThis!Share to TwitterShare to FacebookShare to Pinterest