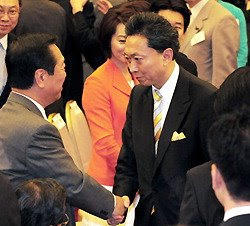 On this picture, DPJ president Hatoyama, right, shakes hands with his predecessor, the opposition chief master Ichiro Ozawa and will act as the boss decided. Dreams come true for... Ozawa? Hatoyama chose Okada Katsuya as Secretary General and Ozawa acting president in charge of the election. Most certainly, Aristotle quotes are justified for Ozawa Ichiro : "Man is by nature a political animal."

We wish our utmost encouragement to DPJ president to fulfill his program as long as he plans. At least to use his motto to improve demographics to please Obuchi Yuko, minister for Gender Equality who urged to make babies in a recent press event at the Foreign Press Center, Tokyo.

Who is Hatoyama Yukio?

"A fourth generation politician from a rich family and the grandson of a former prime minister, the 62-year-old Hatoyama's image could be tarnished by suspicion he is under the influence of 小沢一郎, Ichiro Ozawa". Ozawa, a follower of ex prime minister Tanaka Kakuei and served under ex prime minister Nakasone Yasuhiro and under the powerful patriarch Shin Kanemaru

Ozawa has just quit as party leader after a fundraising scandal, to try to improve the Democrats' chances in a general election that must be held by October.

"His (Hatoyama) leadership is questioned and the chance of the opposition taking office is limited."

This is why all speeches and messages at yesterday's election day focussed on Hatoyama power and leadership.

Hatoyama, now 62, served as the Democratic Party's leader for three years from 1999, often viewed as being too soft and indecisive.

Political commentators like Hoshi Hiroshi who accurately predicted that Ozawa would resign after the Nishimatsu scandal and the veteran commentator Hayano Toru, both excellent quill pen of Asahi shimbun, told me yesterday at the Okura hotel that they do not underestimate the chance of Hatoyama to become Japan next Prime Minister.

"The cleaner image of the new party leader may help their efforts to convince swing voters to become their supporters".

The Mainichi shimbun has this to say:

"Hatoyama, who relied on the backing of major intraparty factions, was elected just as expected. Hatoyama, who supported Ozawa's leadership as secretary-general, had been aware that he would not win without the backing of Ozawa, and suggested even before the race that he intended to appoint his predecessor to an important post if elected. He also chose not to declare a departure from Ozawa's policy line. Some anti-Ozawa members speculate that the party leadership chose to hold the election only five days after Ozawa's announcement of resignation in a bid to prevent Okada's popularity from growing and ensure Hatoyama's victory. In any case, Hatoyama and Ozawa apparently made up their minds to join hands to win the power struggle."

"Hatoyama's messages remain vague and difficult to understand, as they were in the past. Hatoyama's slogan, "politics full of love," could raise questions about whether politics without love exists. He calls himself "broad-minded Hatoyama," but does it mean he is willing to comply with any request? Politicians' ideals are meaningless unless specific measures are implemented to achieve them. Hatoyama was previously ridiculed as being an alien from outer space because the meaning of his words and behavior was incomprehensible. He should keep in mind that his ability to serve as prime minister is being tested by voters"

Other comments in the media:

"Voters are not very worried about letting Mr Hatoyama become prime minister because he originally came from the LDP."

Worried about what? Fear and emergency are abstract concepts to Japanese and to their Constitution.

One thing Hatoyama and Prime Minister Aso have in common: They both are offspring of wealthy former conservative party prime ministers.

Chalmers Johnson has this to say regarding the history of the Hatoyama family, easily compared here nowadays as the "Japanese Kennedy family", outrageous some say. Quotes:

"The underworld boss Yoshio Kodama, who had worked in China during the war, selling opium and supervising the collection and shipment to Japan of industrial metals such as tungsten, titanium and platinum... returned to Japan after the surrender immensely rich. Before going to prison he transferred part of his booty to the conservative politicians Ichiro Hatoyama and Ichiro Kono, who used the proceeds to finance the newly created Liberal Party, precursor of the party that has ruled Japan almost uninterruptedly since 1949. When Kodama was released from prison, also in 1949, he went to work for the CIA and later became the chief agent in Japan for the Lockheed Aircraft Company, bribing and blackmailing politicians to buy the Lockheed F-104 fighter and the L-1011 airbus. With his stolen wealth, underworld ties and history as a supporter of militarism, Kodama became one of the godfathers of pro-American single-party rule in Japan." (From the London Review of Books Tuesday, November 18, 2003)

Unless the influenza AH1N1 becomes the most serious opponent to the political calendar for 2009, the coming Lower House race to choose the next prime minister will be a competition between party leaders' machines talents. Faced to a strong and nervous LDP of prime minister Aso Taro, The DPJ will lose support from voters if it reveals a dual power structure in which Hatoyama leads the party under the thumb of Ozawa Ichiro.

Ozawa Ichiro, the behind-the-scenes maneuver, not only led LDP for years, but also now leads the opposition... Ozawa always was a strong proponent of political reform, and he pointed out Japan's diplomatic disability in international affairs, particularly revealed in the Gulf War in 1990 and in recent second war in Afghanistan and with the Japanese maritime forces in the Indian Ocean. Last year, he stated that only the United States Seventh Fleet should be based in Japan. After becoming the leader of the Democratic Party, Ozawa led the party to its largest victory in history in the upper house election on July 29, 2007.

Aren't the new clothes of Mr. Hatoyama a bit too big for him?