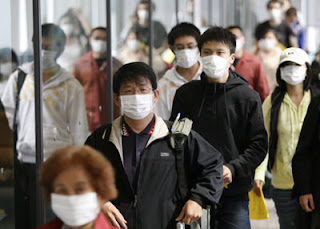 "Are you feverish?" This question is starting to get on people's nerves.

"Doctors and Japanese health authorities do not say the entire truth about how to confront the disease", I am told by Japanese sources who wish to remain anonymous, "there are some antibiotics, pills, for prevention against the new flu A H1N1 but only doctors and related health people who are currently dealing with the sick patients are allowed to take. Not the general public who at the moment is healthy, without showing any sympton. If antibiotics, as a prevention, are allowed to everyone, so many people will just rush into clinics and it will make a panic. Also even if it is allowed, it is not covered by the health insurance."

Domestic cases of swine flu shot up dramatically over the weekend, reflecting the 2 to 3 day incubation period before a carrier starts to show any symptoms. It is during this time that the virus is most likely to spread. So, since a few days, I learned how to live, in my daily transportation, with a mask!

4000 schools closed in Japan after more than 170 cases of H1N1 flu cases registered on Tuesday. Has Japan worked really hard to keep the new flu strain from spreading within its island borders? Japan’s health ministry said 176 people have the virus A H1N1, after 33 new infections were confirmed.

"Experts warned that infections had probably already spread to other regions including the capital Tokyo, which with almost 36 million people, is the world's most populous urban area and the heart of the Japanese economy."

Watching some TV programs in the morning, I was surprised to see that the "talento-TV entertainers" were filmed walking nearly alone in supermarkets and underground shopping districts of Tokyo. The same kind of fear as for the archipelago's earthquake threat: When is it going to strike?

"About 17,000 people a year die in Japan from normal flu, so the current numbers (of swine flu cases) are nothing we should be surprised at, although it is true that it is spreading quickly because not many people are immune to it. The health ministry is preparing a vaccination for the new virus, it won't be available for three or four months and, like the vaccination for seasonal flu, will not provide immunity."

In the first days of world fear, Japan did not react, especially before the Golden Week, and let people go abroad on vacations on the North America continent. It now is establishing testing centres at airports and encouraging people in high-risk jobs to wear masks and wash their hands carefully. But experts now suspect "that a domestic outbreak may have been triggered silently weeks before Japan caught its first cases at its main airport in early May."

“Japan is definitely having human-to-human transmission”. The new wave would make Japan the fourth-most infected country in the world, after Mexico, the United States and Canada, according to several Japanese media reports. "Officials admitted the new figures were disturbing."

The local media are critical of the prevention by authorities. This is in today's Japan Times quoting an expert:

"Quarantine inspection on planes is ineffective because you cannot detect people who have the virus but are not yet showing symptoms, and people don't necessarily tell the truth about their health condition, the government is basing its strategy on procedures to stop a bird flu pandemic. Now that swine flu has spread domestically, it is no longer possible for authorities to spot the people who may be infected. Fever consultation centers will soon be overcrowded, so it's up to citizens to report their conditions accurately and consult their own doctor first."

The government has urged calm and reminded people that no one in Japan has so far died of the disease and that most infections are mild.

I trust these people know what they are doing, although...

"Huuuuum!"
Posted by Unknown at 3:57 PM
Email ThisBlogThis!Share to TwitterShare to FacebookShare to Pinterest