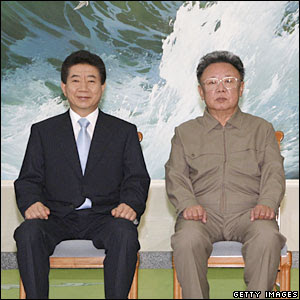 Embattled former South Korean President Roh Moo-Hyun died Saturday morning after apparently jumping to his death from a mountain cliff near his residence in southeastern South Korea. Roh, who was a former human rights lawyer and anticorruption campaigner while president, was target of an investigation about a bribery scandal involving his wife, son and close confidants. Roh aide and lawyer Moon Jae In told reporters Saturday that Roh had "left a brief suicide note to his family."

"Roh left his home at 5:45 a.m. and was climbing Bongwha mountain with his bodyguard. He appears to have jumped from a mountain rock around 6:40 a.m.," Moon, presidential chief of staff during Roh's presidency, told reporters at a hospital in Yangsan, South Gyeongsang Province. Roh, 62, died at around 9:30 a.m. after being taken to Busan University Hospital. The cause of his death was head injuries, according to the hospital. 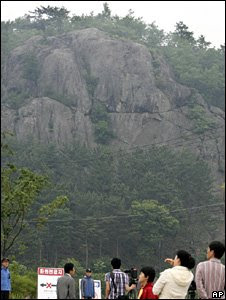 According to police, Roh said in his suicide note, "I owe too many people a debt of gratitude. The suffering of many people because of me is too great. My health is so bad that I can't do anything. I can't even read a book or write anything," Roh's note, the contents of which were distributed by the police, said. "Don't be too grieved. Isn't life and death a piece of nature? Cremate my body and set a small gravestone near my home."

Current South Korean President Lee Myung Bak expressed deep regret over the death of his predecessor. "It is quite unbelievable. I am stricken with sorrow and deep sadness."
Posted by Unknown at 9:10 PM
Email ThisBlogThis!Share to TwitterShare to FacebookShare to Pinterest