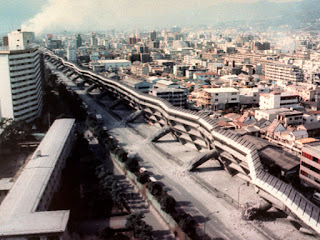 The Great Hanshin earthquake (阪神・淡路大震災 Hanshin Awaji daishinsai). The name of the Kobe earthquake on Tuesday January 17, 1995 at 05:46:53 JST. I covered all week the events for France Inter France Info RFI etc at that time as the first French reporter on zone while authorities were shy of showing real pictures of the damage until around 0900 am for Japan TV state channel. Local country was in chaos, prime minister Murayama (Japanese Socialist Party) has been criticised as he refused the sending of armed forces to rescue the victims. I was in Kobe region on January 17 in the evening catching the first Shinkansen from Tokyo to Kobe but we had to stop at Kyoto for risk of new quakes. Then after securing a room in a hotel in Kyoto I decided to reach Kobe. Not much transportation of course. Chaos. I then walked from Osaka to Kobe and reported there during a week. I could sleep there (as a refugee with Japanese homeless near by city hall) By following Friday in my evening news report I voiced that 5.000 people had died. Some further reports mentioned 6000 to 10 000 died a year after, with lots of homeless remaining. Today there are still homeless from the Kobe earthquake... One thing had been criticised then was the refusal of Japanese customs officers to let French Firemen of Paris come to help and rescue Kobe victims with their Pompiers de Paris's dogs which I heard Chirac had specially sent to Japan. Later on, the European leader Mrs. Cresson (European Commissioner for Research, Science and Technology) was one of the first leader to visit Kobe as a testimony of support.

THE ASAHI SHIMBUN
KOBE--Thirty-three elderly people died alone and unnoticed in 2015 in public housing units for victims of the Great Hanshin Earthquake, the lowest figure since 2000, Hyogo prefectural police said.

The number of “kodokushi” (lonely deaths) was down by seven from 2014. Their bodies were eventually discovered among a total of 265 buildings in Hyogo Prefecture used mainly by people whose homes were destroyed in the 1995 earthquake.

Illnesses caused 22 of the deaths. Two died in accidents, such as choking on food. One death was a suicide.

The bodies of 17 of the seniors were discovered within a day of their deaths. But in one case, the body was found five months after death.

Jan. 17 will mark the 21st anniversary of the Great Hanshin Earthquake, which killed more than 6,400 people, destroyed buildings and homes, and forced thousands to live in temporary housing.

The highest number of kodokushi in Hyogo Prefecture was 77 in 2002.
Posted by Unknown at 11:43 AM
Email ThisBlogThis!Share to TwitterShare to FacebookShare to Pinterest