Hokkaido art and nature : a day with sculptor Isamu Noguchi

Isamu Noguchi was the son of Yonejiro Noguchi, a
Japanese poet and scholar of English literature, and of
Leonie Girmour, an American poet and writer. He was born
in Los Angeles in 1904 and died in New York in 1988. He
spent his childhood in Japan until the age of thirteen
when his mother sent him to be educated in the United
States. 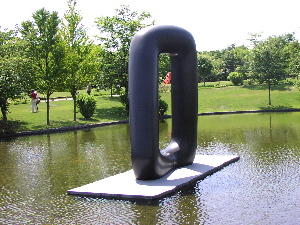 During his first year at Columbia University where he
was a primed student, he dropped out and decided to
pursue his interest in sculpture. He was the recipient
of a Guggenheim fellowship, studied in Paris with
Brancusi, traveled through Europe and Asia and finally
settled in New York in the late Twenties. 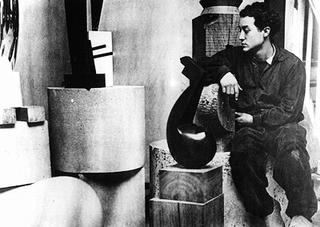 In his New York studio he worked at the beginning on
portrait sculpture, stage sets for Martha Graham,
furniture design and later with architects on larger
environmental projects. He was able to accomplish this
at the same time that he was establishing himself as a
major New York sculptor. 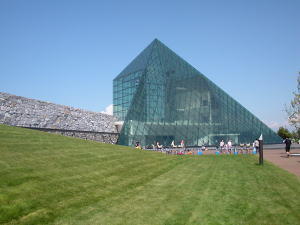 His major works include two bridges in Hiroshima Peace
Park called "Tsukuru" and "Yuku" (1952), the garden at
UNESCO Headquarters in Paris (1956), Philip A. Hart
Plaza and the Horace E. Dodge & Son Memorial Fountain in
Detroit (1976), the lobby of Sogetsu Kaikan, Tokyo
(1977), "Homage to Louis Kahn" at the Kimbell Museum in
Fort Worth, Texas (1982), the marble slide for the U.S.
Pavilion at the Venice Biennale (1986), "Time and Space"
at the Takamatsu Airport , Shikoku (1989) and Moere Numa
Park in Sapporo, Hokkaido which is still under
construction. 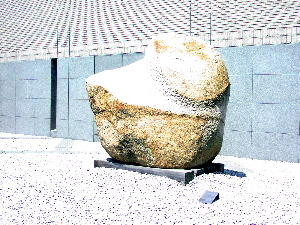 This year, the grand opening of Moerenuma Park, the last
work of the world-renowned sculptor, Isamu Noguchi, took
place in Sapporo. Taking this opportunity, Sapporo city
trying to create a new image of the city centering on
'ART' integrated with the magnificent natural beauty of
Hokkaido.

Moerenuma Park is located in the northeastern part of
Sapporo, where a unique project built a park on land
used as a waste disposal site. The project began in 1979
and the total of 2.7 million tons of waste was collected
and used as landfill until the site closed in 1990. 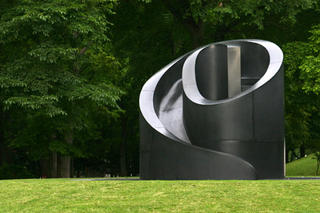 Isamu Noguchi first visited Sapporo in March 1988, and
showed a strong interest in the project. The city of
Sapporo commissioned Noguchi to design the park;
however, Noguchi died soon after completing only the
master plan of the park.

The Isamu Noguchi Foundation and the city of Sapporo
cherished the desire and will of Noguchi and continued
with the project. This whole 189-hectare parkland is
regarded as a sculptural work of Isamu Noguchi.

JjL
Posted by Unknown at 8:06 PM
Email ThisBlogThis!Share to TwitterShare to FacebookShare to Pinterest