Japan Air force ex-Chief: "Japan was not aggressor during WWII!"

Former Japan Air Self Defence Forces chief Toshio Tamogami: ''I was fired after saying Japan is a good country... It's a bit strange''.

Excuse me? Why is this story suddenly appearing in the news? Tamogami was frequently, and some of his colleagues too, known for these shocking views. Shocking, manipulative or just disturbing...? How does Japanese press cover this new incident on revisionism?

It happens after the conviction for bribes and bid rigging of an ex official of the Defense Agency (now a ministry), the vice-minister Moriya, and after the shattering affairs of cadet being beaten to death during sadistic rituals within the forces for the sole motive that he wanted to leave the Self Defense Forces! (A remake of A Few Good Men movie with Tom Cruise?) 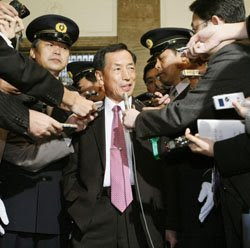 Toshio Tamogami talks with reporters Tuesday in the Diet after testifying over his controversial essay.

Here are press extracts: (Also if you click the title you may read an article written by Professor Herbert Bix, author of Hirohito and the Making of Modern Japan, which won the Pulitzer Prize, teaches at Binghamton University)

Quotes: "Mr. Tamogami wrote an essay, in which he claimed Japan had not been a wartime aggressor in other Asian countries. Tamogami called for revising the U.S. drafted Constitution on Tuesday during a parliamentary session he attended as an unsworn witness to testify about his controversial essay on Japan's role in World War II. The essay accuses the U.S. of "trapping" Japan into attacking Pearl Harbor. Tamogami also argued that Japan's colonial rule brought prosperity to China and the Korean Peninsula. Tamogami left the ministry after being demoted to the rank of lieutenant general on Nov. 3.

'It is better to fix an issue on which such a big difference of opinion exists in relation to national defense,'' Tamogami told the upper house's Committee on Foreign Affairs and Defense. Tamogami, 60, did not elaborate but, according to the Nikkei, was referring to differences over legal interpretations of Japan's Constitution, which renounces war.

Tamogami admitted he had informed the Education Division of the ministry's Air Staff Office of the existence of an essay competition effectively organized by a friend of his. The division chief then notified ASDF units across Japan in May of the competition, organized by hotel and condominium developer Apa Group under the theme ''True Modern Historical Perspectives,'' according to Vice Defense Minister Kohei Masuda.

Of the 235 participants in the contest, 94 were from the ASDF. The high ratio has fueled suspicion that ASDF personnel authored and submitted essays on the political theme in an orchestrated way. But during the upper house committee session, Tamogami denied he told a subordinate to encourage ASDF personnel to submit essays in the competition. Tamogami won the top prize of 3 million yen in the competition with the controversial essay.

In the essay, Tamogami also challenged the restrictions on the SDF's use of arms overseas and the ban on the exercise of collective self-defense -- or helping an ally militarily -- under the pacifist Constitution. Tamogami contributed a similar essay to the ASDF's internal magazine, Hoyu, in May last year, while he was serving as ASDF chief of staff.

"What does Tamogami argue in his essay?

• Japan was never an "aggressor nation." The army advanced into China and what is now South Korea because Japan stationed its military in those areas based on accords and treaties, and Japan was "a victim" that was "drawn into the Sino-Japanese War" with repeated terrorist acts and provocations by Chiang Kai-shek's Nationalist government.
• The Nationalists were being manipulated by the Comintern, an international communist organization led by the Soviet Union. The Comintern was trying to have Japan and the Nationalists fight each other and thereby give Mao Zedong's Communist Party control of mainland China.
• Japan was also "ensnared in a trap that was very carefully laid by the United States" to force it to launch the Pacific War, and a Soviet spy played a key role in prompting President Franklin Roosevelt to take a tough stance against Japan to provoke war.

What are some of the factual errors in Tamogami's argument?

Ikuhiko Hata, a professor emeritus at Nihon University in Tokyo and a noted expert of modern Japanese history, said the essay "is of extremely low quality" and "even a high school student" can easily point out its mistakes.

For example, Japan sent in troops and sparked the Manchurian Incident in 1931, leading to the establishment of the puppet state Manchukuo, and launched full-scale war in China in 1937, all without any accords or treaties with China, Hata pointed out.

Tamogami's essay claims that declassified U.S. government documents prove that Harry White, a senior U.S. Treasury official, was a Soviet spy and he "is said to have been the perpetrator" who wrote the draft of the Nov. 26, 1941, note given to Japan by U.S. Secretary of State Cordell Hull.

Tamogami said Japan decided to go to war with America after seeing the tough U.S. demands in the Hull note. Tamogami thus claims it was White who manipulated the U.S. to "draw our country into a war with the U.S."

But according to Hata, Roosevelt made the decision to take a tough stance against Japan, although he may have used as references policy proposals from the departments of State and Treasury.

The allegation that White prompted Roosevelt to get tough with Japan is groundless, Hata said.

Few would share Tamogami's conspiracy theory of the Comintern's involvement or would be willing to defend the obvious factual errors in his essay.

But some conservative intellectuals and politicians, as evidenced by various gaffes in the past, may sympathize with Tamogami's position over Japan's colonization of Manchuria, and its rule over the Korean Peninsula and Taiwan, as well as his claim that Japan should not be singled out as the only "aggressor nation."

Tamogami wrote that unlike Western powers which had colonized other areas, Japan ruled Manchuria, Korea and Taiwan peacefully, developing their economies and improving their living standards. Japan also provided education to people in those areas, even setting up major universities.

Tamogami argues that if Japan should be labeled as "an aggressor nation," all of the Western countries that were colonial powers should be described in the same way.

"There is no reason to single out Japan as an aggressor nation," Tamogami argues in his essay.

It reflects only some aspects of Japan's colonial rule of Korea, Manchukuo and Taiwan. It is true Japan invested a considerable amount in the infrastructure of the three colonies and tried to develop their economies.

That policy was particularly successful in Taiwan during the 1895-1945 colonial rule and even laid the foundation of Taiwan's rapid economic growth in the postwar years.

For example, according to Kiyoshi Ito, a Taiwan-born historian, railways in Taiwan were extended from 100 to 600 km by 1917, rice production was doubled and exports increased 9.8 times.

A fact-finding mission sent by the Nationalists was greatly impressed with Taiwan's economic development under Japan's rule and gave it "unstinted praise" in a report published in 1937, Ito pointed out in his 1993 book "Taiwan."

Japan's colonial policy, however, was largely aimed to help the economy at home, and Japan later further exploited the colonies' economies to help it continue the fight in China and against the Allies.

Japan in addition inflicted devastating economic damage on China and other parts of Asia in the 1930s and '40s.

Is Tamogami the first to make such comments?

The essay is merely another installment of skewed perceptions of the war held by some leading figures. Cabinet members make blunt comments every now and then, including in May 1994, when then Justice Minister Shigeto Nagano openly challenged Japan's atrocities in China.

"The Nanjing Massacre was a fabrication," he said in an interview before being driven to resign.

Nagano, who served as chief of the Ground Self-Defense Force before turning to politics, was known for his support for deleting references to wartime sex slaves, known euphemistically in Japan as "comfort women," from school textbooks.

Where did Tamogami get the ideas for his essay?

At a news conference last week after his retirement, Tamogami told reporters his essay was not his own creation but "an opinion formed after reading books by other experts."

Deliberations in the Diet since the incident have elucidated controversial practices within the SDF, including ultraconservative lectures for officer education.

A textbook used at the Command and Staff Course of the Maritime Self-Defense Force says the Japanese people "lost their confidence because of losing the war," and that showing patriotism has not only been forbidden but is a taboo that "enslaves people to low consciousness."

Defense Minister Yasukazu Hamada acknowledged during Diet committee deliberations that use of that textbook is "extremely incompatible."

Do scholars back Tamogami's view?

Tadasu Kumagai, a military analyst and former ASDF officer, said Tamogami may have caused a frenzy because of his status, but the essay itself is not completely inaccurate. Tamogami should have taken a more academic approach to prove his points instead of quoting publications by others, he said.

In backing the content of the essay, Kumagai was critical of the International Tribunal for the Far East, which Tamogami claimed to be a source of "mind control" over the Japanese people.

"It would be misleading to say that the trials were one-sided," Kumagai said, but added that in reality they were held under the complete management of the Allied forces and the rulings were spread among Japanese people as genuine, without any counteractions." End of quotes.
Posted by Unknown at 12:13 PM
Email ThisBlogThis!Share to TwitterShare to FacebookShare to Pinterest