In Japan, the "Golden Week" May holidays' car traffic
jams peaked this year. Thanks to an unexpected gift
from Prime Minister Aso's administration. Due to
massive amount of travellers on vacations or returning
home, national expressways were congested to a
historical level across the archipelago because of a
popular toll discount introduced in March for weekends
and holidays.

The discount system sets a uniform toll of ¥1,000 for
cars and motorcycles using electronic toll collection
devices on expressways outside the Tokyo and Osaka
metropolitan areas, regardless of distance.

A tally of traffic jam forecasts by several expressway
companies shows that traffic jams of more than 30
kilometers long will happen 56 times between April 25
and Wednesday May 6th, while there will be 372 traffic
jams at least 10 kilometers long. Both these figures
are more than double the 2008 number! 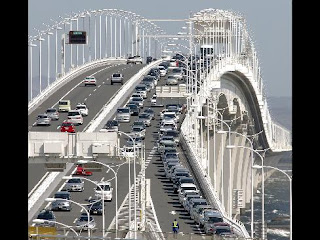 More than 50 km of unbroken "jutai" [traffic jam] for
2 consecutive days were actually accounted by
authorities on a specific segment of the national road
as media reported on Tuesday, breaking the longest
ever traffic jam registered! A volume that has been
even greater than predicted. My last memory of road
Dante's Inferno was from Shimoda to Tokyo, 15 hours in
the car. Bubble economy's era.

Orwellian strategies to avoid jams and traffic
headaches were put on the paper by complicated
bureaucratic minds such as this one. Tell me if you
understand:

"When traveling from Ginza, Tokyo to Sendai, on what
Yamamura called Route A, starting from the Shuto
Expressway, via the Misato Junction followed by the
Joban and Banetsu expressways, which join to the
Tohoku Expressway, it is 14 kilometers longer than
Route B, which uses the Kawaguchi Junction to quickly
enter the Tohoku Expressway. However, Route A has
fewer spots that are prone to traffic backups.
According to NEXCO's calculations, if one departs at 9
a.m. on May 2, the first day of the core five-day
holiday period, it would take six hours to reach
Sendai using Route A, one hour and 15 minutes faster
than Route B."

Mathematics or labyrinth? Vacations could become more
ever complicated. More, no-one has yet evaluated the
surplus of CO2 pollution during the Golden Week 2009
vintage, I mean, officially. 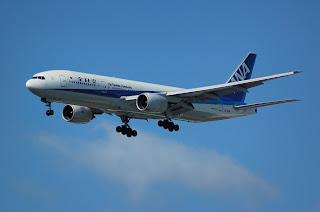 Some more reasonable minds opt for railways and air
planes, not a must for CO2 payload, but a relief for
drivers.

Almost all of the trains' reserved seats on the
Tokaido, Tohoku, Yamagata, Akita, Joetsu and Nagano
"shinkansen" --the Japanese TGV-- lines were booked on
the East Japan Railway Co. and Central Japan Railway
Co. Domestic flights departing Tokyo and Osaka were
also fully booked up on ANA All Nippon Airways and JAL
Japan Airlines.