For Japanese media, "it's charisma, stupid!" 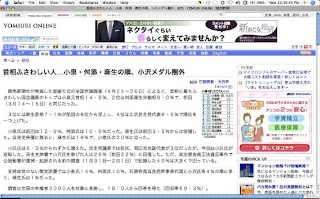 What is best in a traffic-jam? Listening to a CD, to
your favorite radio program or reading the newspapers***.
For the folks who forgot during the Golden Week that
there is a political scene in Japan too. 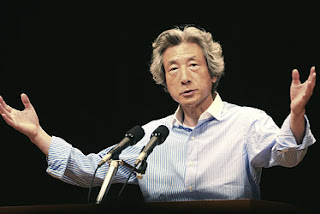 14.8 percent of respondents to the nationwide survey,
conducted on April 25 and 26, believe Koizumi would be
the best person for the job, up from 12.9 percent in
the previous poll taken on March 14 and 15. 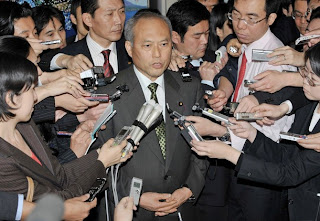 No surprise that the current politician in charge to
combat the A H1N1 flu rises in the polls. Health,
Labor and Welfare Minister Yoichi Masuzoe, Tokyo
University Professor and late former prime minister
Takeshita Noboru protégé, came in second rank again,
with 9 percent of respondents selecting him, down from
10.6 percent.

Prime Minister Taro Aso just reached the third rank in
the poll, almost doubling his vote from 3.5 percent to
7.1 percent since he gracefully offered 12.000 yen to
each Japanese citizen to "fight against the world
economical crisis."

Democratic Party of Japan President Ichiro Ozawa
collected 6.5 percent of the vote, up from 6 percent.
Ozawa moved up from fifth to take fourth spot, which
was previously occupied by DPJ Vice President Katsuya
Okada. In doing so, he became the DPJ lawmaker seen
as most suited to becoming prime minister.

Junichiro Koizumi is alike ex president Jacques Chirac in
France, the less you see them, the higher their
popularity are. It also is a reminder that "before was better",
according to the conservative, center-right Yomiuri
shimbun, world largest newspaper in circulation, over
13.8 millions a day.

*** There are seven major newspapers in Japan for a
total of 150 daily newspapers, news agencies and
broadcasters. Papers have two editions, morning and
evening, with a total daily circulation of 51,491,40 for
52,324,877 households and a rate of 94.60 % for home
delivery . The papers are: the Asahi Shimbun, the
Mainichi Shimbun, the Yomiuri Shimbun, the Sankei
Shimbun, the Hokkaido Shimbun, the Chunichi Shimbun
and the Nishinippon Shimbun.
Posted by Unknown at 11:55 AM
Email ThisBlogThis!Share to TwitterShare to FacebookShare to Pinterest