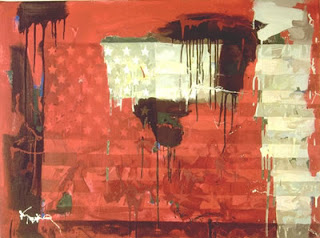 Symbol of war and peace by Chinese painter Yi Kai


Following my May 11 post "Tokyo bows to Bataan Death March POWs", I had a dialogue on the Japan US scholars NBR forum to analyze the recent attitude by Tokyo and Washington regarding Japan apologies and compensation to WWII POWs'. Here is the answer of researcher Dr. William Underwood whom I thank for his comments.

" The May 10 issue of the Nihon Keizai Shimbun has a sizeable article featuring NBR Japan Forum member Lester Tenney, commander of the POW group “American Defenders of Bataan and Corregidor” (ADBC). The article by staff writer Nakamae Hiroshi describes the two apologies Dr. Tenney recently received in letters from Fujisaki Ichiro, the Japanese ambassador to the U.S. (In response to questioning by the DPJ, the Aso administration also made a recent apology in the Diet to all former POWs; this statement was less specific but more “official” than the letters from the ambassador.)

More importantly, and since I have posted here regarding the frequent mismatch between Japanese apologies and actions, it appears the government of Japan (GOJ) is on the verge of including American POWs and their family members in the Peace, Friendship and Exchange Initiative (PFEI). Hundreds of British and Dutch POWs and family members have made goodwill visits to Japan since the little-publicized reconciliation program began in 1995, but Americans have been excluded. Dr. Tenney has been calling for PFEI participation by Americans for a couple of years now.

Nikkei quotes a “knowledgeable” but unnamed GOJ official as saying the new apologies to the ADBC group represent a “half-step forward.” This implies another half-step may be on the way. A sidebar article is titled "Exchange is the Key to Reconciliation." It quotes Dr. Tenney as saying American POWs want their grandkids to be included in the PFEI too. The following (and final) sentence quotes Ambassador Fujisaki as saying the Japanese government is considering some conciliatory gesture for American POWs.

This is all quite fascinating for reparations watchers and may have relevance for other WWII claims involving Japan (and perhaps the U.S.). One aspect of the lengthy reparations impasse involving Japanese war conduct has been that GOJ and the dozens of still-operating Japanese companies that used wartime forced labor could say to themselves, "If we can get away with resisting demands from American victims (with the blessing of the U.S. government, our closest ally), then we can withstand any pressure from Asian victims." Extending the PFEI reconciliation program, itself basically a spin-off of the 1995 Asian Women’s Fund for former “comfort women,” to Americans may serve to raise the bar (or lower the firewall) for Japan in addressing other claims.

New movement is visible on various fronts. On May 2, somewhat surprisingly, the Asahi reported in Japanese and English that Nishimatsu Construction Co. is now in talks to settle the compensation claim stemming from Chinese forced labor (CFL), even though that claim was rejected by the Japan Supreme Court in its “death-knell” decision of April 2007. Asahi, which treads pretty cautiously these days on WWII matters, says Nishimatsu is preparing to compensate all 360 Chinese workers or family members (not only the actual plaintiffs), although the company has consistently denied all wrongdoing. Mitsubishi Materials Corp., meanwhile, expressed newfound willingness to settle a CFL claim at the Fukuoka High Court last year. Mitsubishi had previously defended itself by aggressively employing historically revisionist arguments, despite the fact that 31 percent of Chinese workers died at one of its Kyushu mines in 1944-45.

Prime Minister Aso, moreover, will have to respond in the near term to the demands for apology and compensation that have been publicly issued by the three Australian survivors of forced labor at Aso Mining. Kyodo, Jiji, AFP, Bloomberg and The Australian all noted these pending demands in reports last month. PM Aso’s POW problem has assisted Dr. Tenney’s claim through “cross-pollination.”

More generally, there are signs that the global reparations trend may be picking up steam again in the age of Obama. The heyday stretched from passage of the Japanese American redress law in 1988 to enactment of the German forced labor compensation fund in 2000, and found expression in myriad ways. (It is noteworthy that the Japanese government and corporations today possess, via the Supreme Court ruling, the all-important “legal immunity” that their German counterparts obtained through complex legal negotiations centrally involving the Clinton administration.) Right up until 9/11, in fact, Congress was poised to assist lawsuits in U.S. courts by American POWs, by blocking the executive branch from interpreting the San Francisco Peace Treaty as having waived rights to file lawsuits. But then the Bush-era “war on terror” tended to place civil liberties and human rights, the soil in which claims for historical justice are rooted, on the back burner
and sent the trend into hiatus.

President Obama is clearly in an apologetic mood, not merely in order to distant himself from President Bush but on grounds of political philosophy, I think. Last summer Nancy Pelosi visited Hiroshima as House speaker; a few weeks back the Mainichi floated the idea of the Emperor apologizing at Pearl Harbor and Obama apologizing at Hiroshima. That might neatly “bookend” the 1941-45 phase of the Asia Pacific War involving the Allied nations. DPJ member Fujita Yukihisa, who has been energetic in his support of Japanese interned in postwar Siberia while also spearheading the Aso POW issue, has indicated that his party will move to proactively resolve history issues if it comes to power."

End of quotes.
Click the title to access the NBR text of Dr. Underwood
Posted by Unknown at 8:35 AM
Email ThisBlogThis!Share to TwitterShare to FacebookShare to Pinterest