And then the unexpected happened! Really?
I definitely will have to find more on this.

The Japanese government has extended an apology through its ambassador in the U.S. to former American prisoners of war who suffered in the "Bataan Death March" in the Philippines during World War II, it was learned May 9 [according to the Nikkei May 10, click the title to read the story]

It marked the first time for Japan to apologize specifically to those who survived the infamous march on the Bataan Peninsula, which resulted in numerous deaths. The commander of the group representing POWs said, "It took a long time, but I am glad to hear a formal apology from the Japanese government."

The POW group is called "American Defenders of Bataan and Corregidor," and led by Commander Lester Tenney, 88, a professor emeritus at Arizona State University. The group is scheduled to disband by the end of this month due to aging of the members. 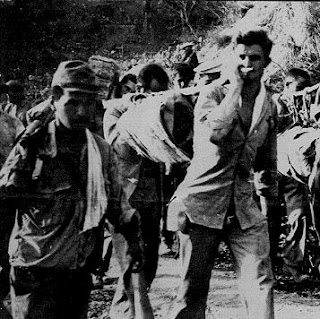 "It was pretty rough to watch," Tenney says of the brutal torture during the Bataan Death March (in a Japanese photo)

The apology was extended in the letter by Japan's ambassador to the U.S., Ichiro Fujisaki, based in Washington, D.C. Fujisaki said in the letter to Tenney last December, "We extend a heartfelt apology for our country having caused tremendous damage and suffering to many people, including those who have undergone tragic experiences in the Bataan Peninsula and Corregidor Island in the Philippines." In February, Fujisaki sent another letter, which said, "What we informed you in the previous letter is the result of careful consideration, and it reflects fully the Government of Japan's position."

In 1999, Tenney sued Japanese companies that used him and other POWs as slave labor during the war. The U.S. Supreme Court in 2003 dismissed his case, noting that the U.S. waived the right to claims under the San Francisco Peace Treaty with Japan. But, Tenney says, "Moral responsibility of those companies remains." He is still waiting to hear an apology from them.

"December 8 1941, Luzon, Philippines — Within hours of the surprise attack on Pearl Harbor the first waves of Japanese aircraft attack Clark Airfield north of Manila, the Philippine capital. They are met by fierce antiaircraft fire from New Mexico's 200th Coast Artillery (AA). The Guardsmen are credited with destroying at least two enemy aircraft in this attack. In April 1942, due to most of the troops suffering from illness plus a lack of food and ammunition, the unit, along with all remaining American and Filipino forces still fighting on the Bataan Peninsula, was compelled to surrender. The men were lead into captivity as part of the infamous "Bataan Death March." Those soldiers who survived the march remained prisoners of war for the next three years."

I met and accidentally worked a while with Hampton Sides in Tokyo while he was spending months in Japan to write his book on Bataan Death March helped by a very close person of mine at Foreign Press Center, in Kasumigaseki, Tokyo. Actually I introduced Hampton to Lester Tenney and his son at an event on Taiwanese comfort women that was organized in Tokyo early 2000s'. His resume on the publisher mentions Hampton Sides is a native of Memphis, worked as editor at large for Outside magazine and the author of the international best-seller, Ghost Soldiers (Doubleday), which was the basis for the 2005 Miramax film, The Great Raid. Ghost Soldiers won the 2002 PEN USA award for non-fiction and the 2002 Discover Award from Barnes & Noble, and his magazine work has been twice nominated for National Magazine Awards for feature writing. Hampton is also the author of Americana (Anchor) and Stomping Grounds (William Morrow). A graduate of Yale with a B.A. in history, he lives in New Mexico.

Ghost soldiers: the forgotten epic story of World War II's most dramatic mission
By Hampton Sides
ISBN 0385495641, 9780385495646
Posted by Unknown at 12:34 PM
Email ThisBlogThis!Share to TwitterShare to FacebookShare to Pinterest