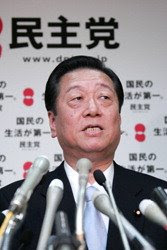 "I have decided to resign by sacrificing myself for the party to win the upcoming election and bring about a change in regime," said Ichiro Ozawa at a press conference at the party's headquarters in Tokyo. Ozawa emphasized that his resignation is to calm turmoil within the party, and not to take the blame. "My entire aim is to increase party solidarity and strengthen party unity."

DPJ lawmakers and the ruling LDP criticized Ozawa for his handling of a scandal which involved years of contributions from Nishimatsu Construction, a company that had ties to Ozawa's funding raising organization called Rikuzankai.

"It will be conducted after Diet deliberations on the supplementary budget draft for fiscal 2009.". Ichiro Ozawa ends his leadership May 13 but won't resign from the Diet.

Portrait of a (potential) DPJ leader 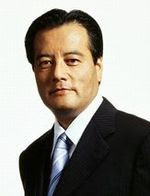 DPJ deputy leader Katsuya Okada. He is viewed as the most encouraged candidate from Japanese medias who describe him as Mr Clean in spite of some former little problems too such as a lack of charisma and leadership. His father is the founder of Aeon, which in 50 years has become the second largest retailer in the country.

Former METI who joined LDP then "repelled by their corruption" joined DPJ, Okada did well in 2004 and 2005 and could be a key in securing trust with Asian leaders. He is the most likely successor, but he has not yet made an announcement to that effect. His problem: he does not smile enough! He wrote a book: “The Alternation of Political Power Will Change This Country.”

About politics, he himself comes from the ranks of bureaucracy, he has this to say in an interview for a Japanese daily last summer:

Q: During this Diet session, there was a continuing stream of revelations about the bureaucracy’s malfeasance. The DPJ has been insisting that Japan extricate itself from its reliance on the bureaucracy?

Okada Katsuya: "Kasumigaseki (the bureaucracy) and the ruling party (LDP) have shared interests, so the LDP can’t move at all, but we have no restraints. Many people sense that the current administration is unsatisfactory and inadequate. We will encourage and support those in the bureaucracy who will work hard."

Q: "What political developments do you see in the future?

Okada Katsuya: "Over the next 10 years, I think the DPJ will form several governments. When that happens, the LDP could fall apart, or reform itself, let a new generation take over, and be reborn as a powerful competitor to the DPJ. I hope they are reborn. The DPJ might become the opposition party through the choice of the people, and might become the ruling party. If we serve as the ruling party twice, then we can say that democracy has taken root in Japan."

Also in the running are Secretary General Yukio Hatoyama, and acting President Naoto Kan. Now he, Naoto Kan would indeed make political life really in tune with today's world politics and his strength could make Japan behave like an "independent and appealing" power. As Ozawa expects.

It's up to timely strategies for the opposition and the ruling LDP in creating next agenda. Change course for DPJ and begin cooperating with the government especially on the urgent matter of economical and social crisis to ensure that at least some important pieces of legislation are passed?

Coming elections certainly are to be crucial and LDP's camp lost its chance to strike against DPJ after the boss left the conductor's seat. How will DPJ distinguish itself from the LDP and prevent under-ranks' divisions undermining its power to eventually seduce the electorate?

Now one question: Will Aso's led LDP loose next parliament election and therefore the power?

Nothing sure. Still all elements are in the postcard to see a change in power in a normal democracy: an exhausted ruling party mined by scandals and lack of political wit with political power assumed by bureaucracy whose blindness to ordinary people and local cities hardship defeats all imagination. Most important, Japan too is exploded by a world economical crisis. Still LDP rules even with a minor popularity advantage.

"The election, Ozawa said yesterday at his press conference, will be the DPJ's best and biggest chance to realize a change of government.".

Katsuya Okada 岡田克也, born July 14 1953, is a member of the House of Representatives of Japan, and the former president of the Democratic Party of Japan. A native of Yokkaichi, Mie, (near Osaka and Isé) Okada graduated from the University of Tokyo with a degree in law, and entered the Ministry of International Trade and Industry. He later joined the Takeshita faction of the Liberal Democratic Party, and followed faction leaders Tsutomu Hata and Ichirō Ozawa to join the Japan Renewal Party in 1993. Through a series of splits and mergers, Okada then became a member of the Shinshinto, Sun Party, and Minseito, finally entering the DPJ upon its merger with Minseito in 1998. He became president of the DPJ on May 18, 2004 and led the DPJ to one of its largest electoral victories in history during the 2004 House of Councillors election.