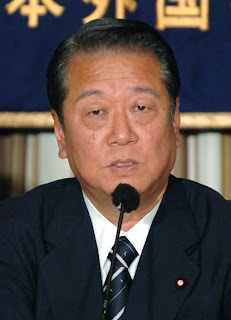 Opposition leader Ichiro Ozawa on Monday expressed his intention to step down following the indictment of his top secretary in a political funds scandal that has threatened his party's prospects of winning the next general election, according to a party executive.

When the scandal broke in early March, Ozawa said he would stay on as president of the main opposition Democratic Party of Japan, denying any wrongdoing despite criticism that the incident undermines public trust in politics.

His successor to be announced.
Posted by Unknown at 3:15 PM
Email ThisBlogThis!Share to TwitterShare to FacebookShare to Pinterest